We just got back from Italy with our senior class - 79 students. Here are a couple of quick sketches I did last night at a concert all of us attended. The concert featured Vivaldi's Four Seasons. It was amazing. The sketch below had to be fast so I was unable to include the other six members of the string ensemble called, "Interpreti Veneziani". This view was drawn from my seat on the front row to the extreme left of the stage. These guys are amazing, see the one minute video we took below for a sample. 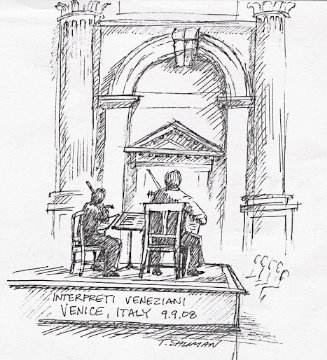 This little sketch was also done during the concert. Interpreti Veneziana holds there concerts in a former church. There are several statues in various spots inside. This particular sculpture was interesting because it featured a vail over the woman's face. How is it possible to depict a vail in stone? Well, the artist did it quite nicely. Thanks Ginny for inspiring me to do some sketches. The paper you gave me was just what I needed.

Email ThisBlogThis!Share to TwitterShare to FacebookShare to Pinterest
Labels: Italy 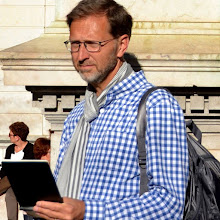 This blog arose following a stress-related crash I experienced as a leader of an international Christian school. God met me during this time in new ways. It was my brother Jim who challenged me with this question, "Tim, tell me, what are you doing to unstring the bow?" This blog became part of the answer to his question.

Articles to help Unstring the Bow

Books to Help Unstring the Bow